PELLA, Iowa / Jan 27, 2021
When the derecho hit Cedar Rapids in late summer 2020, there was a lot of damage and debris to attend to. Vermeer horizontal grinders helped local contractors rise to the challenge.

On Monday, Aug. 10, an inland hurricane (called a derecho) swept across the Midwest, dealing unheard of damage to communities across the nation. Cedar Rapids, Iowa, was one community with significant damage – homes, businesses, vehicles and 65 percent of the city’s trees were destroyed as winds were estimated to have reached more than 120 mph (193 km/hr). A Vermeer customer was awarded the grinding contract for tree debris. They mobilized their HG6800TX horizontal grinder into Cedar Rapids quickly and signed a rental contract with Vermeer Midwest for a second HG6800TX to be onsite by Sept. 1. This drove an order placement from Vermeer Midwest to the factory with a tight delivery timeline.

All was on schedule for the completion of the machine early in the week of Aug. 24. However, things took a turn for the worse when the engine was installed and would not start up on the line. It was now Wednesday, Aug. 26, and the team was not going to let this major setback stop them. After a call to the engine manufacturer, it was determined late that afternoon the engine would need pulled out of the machine.

To do that, the team transported the machine over to Shop 48 and partnered with Engineering Area Manager Brian Clark’s team. This allowed for the line to continue producing other retailed horizontal grinder units. By Thursday, Aug. 27, the engine was out of the machine and ready to be replaced. Five assembly team members worked on the unit in Shop 48 well past the end of their normal shift.

That Friday, the team was back in after several checks to confirm that the engine had been the only issue with the machine. After that was confirmed, the team began work on installing the new engine. Once again, these team members stayed late into Friday evening to get the engine installed. This included transporting the machine back over to Plant 3 where they finished the final touches to have the machine ready for the end-of-line quality check.

Saturday morning, a decision had to be made on sending a truck to pick up the machine by 8 a.m. Team members were working well before the sun was up to complete the quality checks by 8 a.m. The machine passed inspection and was ready for pickup to be delivered to Vermeer Midwest. The dealer finished their pre-delivery inspection (PDI) Monday, Aug. 31, and had the unit running on the customer’s jobsite in Cedar Rapids on Tuesday, Sept. 1, as promised.

Team members involved went to see the machine grinding through storm debris in Cedar Rapids – some had never seen a horizontal grinder operating on a jobsite before.

Logan Vos shared the following about the experience, “It’s nice to a see a machine that we assemble come out here, help people out, get the work done like it should and just make the world a better place.”

Products mentioned in this article 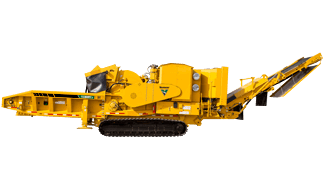 Vermeer continues to innovate with the introduction of the redesigned Vermeer HG4000 horizontal grinder, sized for tree care professionals and mulch producers.

Fecon LLC announces the purchase of the Vermeer forestry mulcher product line and through this arrangement has established a global distribution agreement with the company.